How to Kitesurf | Adventure Sports news

By Jo-Ann Halstead 02/03/12 Article 0 comments
It´s almost spring and we are now permitted to start thinking about water sports and sun! There are new hybrid sports popping up more and more and kite surfing is quickly gaining in popularity on the coast of the UK as an extreme water sport!
Kitesurfing could be considered a mix of surfing, windsurfing, paragliding and wakeboarding with some acrobatics thrown in! Kitesurfing, which can also be called Kiteboarding, uses the natural force of the wind to propel the kitesurfer on the board across the surface of the water. The boards, which are known as kiteboards, are similar to small surfboards or wakeboards, which may or may not have bindings, depending on the kitesurfer´s preference. 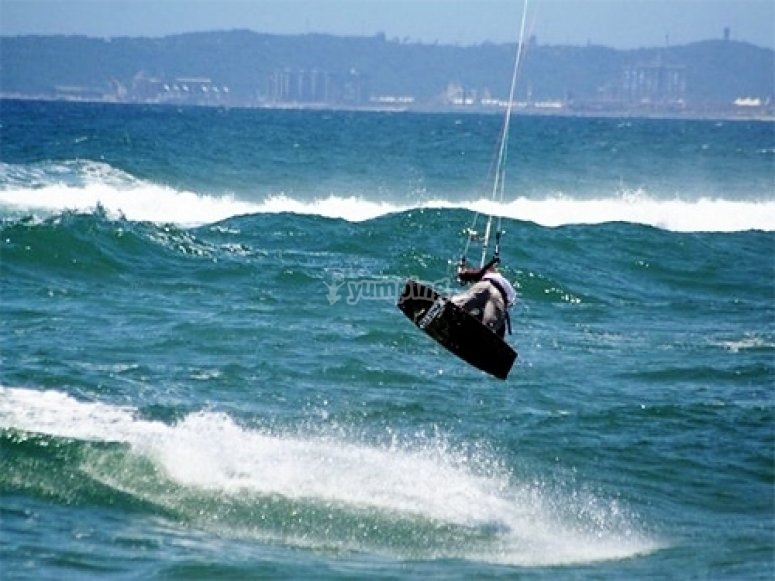 As any extreme sport, kitesurfing presents some dangers. Modern technology is improving its safety record but kitesurfers must be aware of other kitesurfers and the weather as strong winds present the biggest danger. It is highly advisable to have training a a kitesurfing school.

What to do with a Kite and board:

Turning, controlled flying and board grabs and jumps. There are various ways of turning which depending of the skill level of the boarder. Board grabs are done in the air and there are different names for the grab depending on which part of the board is grabbed. Controlled flying and jumping is one of the most attractive aspects of this sport, but it can also be the most dangerous. Boarders create tension on the lines and position the kite overhead which causes the board to ¨release¨ and boarder starts to ¨fly¨.

As in many sports, there is an extensive list of jargon used by kitesurfers to describe the tricks, stunts and conditions.

When it comes to the history of Kitesurfing, it only really came about as a widely popular sport until the late 90s. Since the 1800s people have been trying to combine kites with buggies, boats, skis and skates, although it wasn´t until the 70s that a special kite was designed and patented. Bruno and Dominique Legaignoux, two French brothers, designed the kite which became the model for kitesurfing kite designs. Kitesurfing boards were developed in 1997 and by 1998 the first competition was held in Maui, Hawaii (where else!). Now that this is a widely known and practiced sport, there is a national governing body called BKSA, the British Kitesurfing Assosiation.


The basic gear needed to start kitesurfing is a kite, board, harness, flying lines and control bar. Kites can be foil kites or leading edge inflatables and they can in different sizes for different variations of kitesurfing. It would also interest the kitesurfer to invest in a neoprene wetsuit as if they are going to be spending long periods of time in the water, it´s best to stay warm. A safety hook knife is also required for getting out of trouble if the kitesurfer had to break lose in any moment. A PDF and helmet and even GPS are optional and depend on kiteboarders tasters.


There are many different forms of kitesurfing which can be independent although some do end up being a mixture: 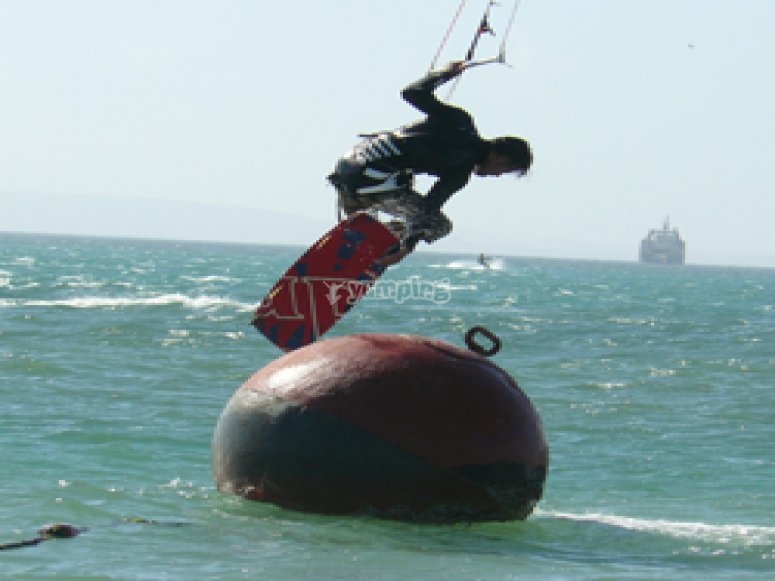 Freeride-The most common way to enjoy kitesurfing. The vast majority of equipment produced is for this category and it involves riding and developing skills and technique.

Freestyle-In this style of kitesurfing, the kitesurfer uses the kite and board to get high above the water in order to practice tricks in the air.
Wave-riding-This is a combination of surfing and kiteboarding that requires waves and wave breaks. The board is a bit larger and can also be used for regular surfing if the bindings are removed. This board is a directional board and it needs to be able to turning easily in order to surf the waves.
Wakeskate-This version of kitesurfing uses a board similar to one the size of a skateboard. The board is binding-free and is also done on flat water.

Wakestyle-similar to wakeboarding. The kitesurfer uses a board with bindings to perform tricks and stunts, occasionally off of ramps. Flat water is optimum for this category.

Jumping-This may be seen as belonging to the category of Freeride. It involves what the name implies; jumping and these kitesurfers often use kiteloops to gain more height and the kites have shorter lines and kites smaller than others.

If you interested in trying this sport, now is the time to start looking! It´s an exhilarating sport that unites the beauty of water and wind sports! As we are lucky enough to be an island, there are endless locations within Scotland, Wales, and England like Devon, Weymouth, Calshot and Aberdeen (just to name a few)!

0 comments in "How to Kitesurf"