By Jo-Ann Halstead 03/04/12 Article 0 comments
The HMS Scylla, located on the south-east coast of Cornwall in Whitsand Bay and is a popular wreck dive site in the UK. She was purposely sunk in order to create a safe and shallow wreck dive site for divers and a prosperous and thriving reef.
Diving is an extraordinary watersport that has captivated fans the world over. Diving opens up the door to the secret underwater world which holds stunning wildlife, underwater landscapes and intriguing ship wrecks. This is where wreck diving comes from. It come from the urge of human curiosity to explore ships and airplanes that lie on the ocean floor, many which sunk tragically or other which were sunk on purpose to create attractive locations for divers while at the same time giving older ships in disuse a new calling.

This  wreck dive site in particular offers the diver the opportunity to explore the HMS Scylla (although the extent to which the diver may explore depends on the diver´s level of training) as well as the Scylla Reef that was grown and prospered since 1994.

This Scylla and the Scylla Reef have created a great amount of tourism (an estimated £5m  annually) for the local area where she lays in Whitsand Bay in south-east Cornwall. It has also provided a diving spot for ovef 30,000 divers as well as providing a habitat for an extensive array of marine creatures which in turn as made this a landmark for scientific investigations.


History of the HMS Scylla:

The naval history of the HMS Scylla is what attracts so many to her. HMS Scylla was the last ship to be built at the Devonport Royal Dockyard in Plymouth. She belonged to the Royal Navy for 25 years and was the protagonist during the Cod War with Iceland as a patrol boat, the Queen´s Silver Jubilee, humanitarian aid for Cayman Brac after the hurricane and was part of the Armilla Partrol for the Persian Gulf.


In December of 1993 she was decommissioned and after her fate in Portsmouth until it was decided that she was to be sunk. After her 25 years of service she was become old and it was ever more difficult to steer her.


A group of UK divers pulled together to request that she be sunk in order to create a wreck dive and reef site that was hospitable and in safe waters. The funding was granted and on 27 March 2004 she was sunk. Prior to her sinking much work had to be done to ensure that she was safe and environmentally harmless. In order to do so her tanks had to be cleaned, copper piping and wiring was removed as were dangerous materials such as batteries, radioactive materials, antifreeze. Her masts and sonar domes were also removed so that she could be sunk in shallow, diver-friendly water and allow other boats to pass overhead. The body of the ship was also altered having 58 holes made and warning signs hung around the ship.

The HMS Scylla lies 50O 19.64’ N 004O .15.2’ W (Admiralty Chart: Plymouth 1900) in Whitsand Bay, South East Cornwall. Scylla lies close near James Eagan Layne which is only about 700m away, making this a great site for more than one dive. The wreck depth is approximately 21m (26m during spring tide). The visibility for the water in the area is normally roughly between 3-8m and there is usually a SW wind.
Diving the wreck:

Diving this wreck is a fabulous experience for all divers however divers must not penetrate the wreck unless they hold the correct certification and have experienced wreck divers. No artifacts may be taken from her.

Prior to the dive, it is recommended that divers familiarize themselves with the wreck and the difficulties she may present during a dive. Always make sure you dive with a buddy and that your equipment is fully serviced. Never go beyond your comfort level nor your exceed your skills. 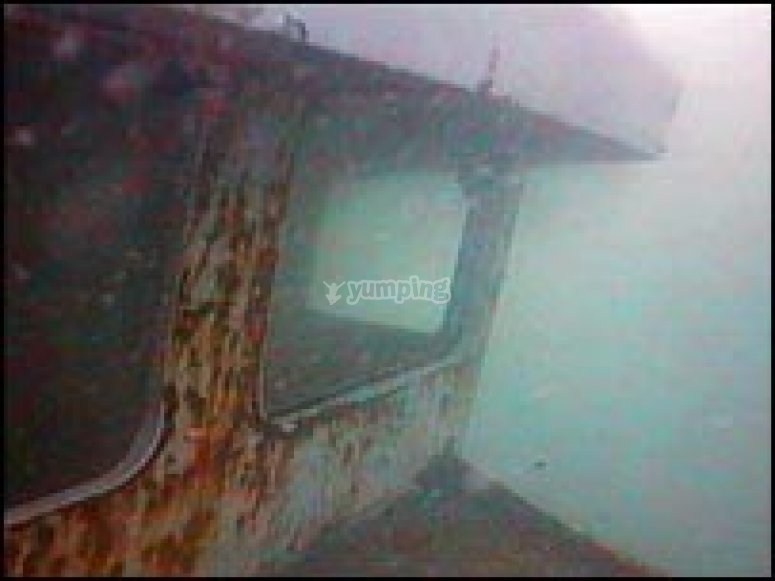 Experienced divers can enter her lower decks and fascinating areas like the mess decks, galley, the bridge and operations rooms can be explored, however these areas are suitable for experienced divers only.

If you are interested in diving this site, get in touch with a dive centre in Cornwall to find out about excursions to the wreck or, if you are venturing out alone,for permits, where to launch from. Enjoy!